Did I kill my starter?

For the second time, after feeding the remainder of my starter  I noticed that it had lots of bubbles but just wasn't rising. Had I killed it?

I had used part of the starter for a bake and then fed the remainder with one-part strong white bread flour and one-part water. I did this again 12 hours later, but there just wasn't any visible life beyond lots of bubbles.

I've read lots of things telling me that it is very difficult to kill a starter. From what I can gather, this is a very common issue and I had a lot of the tell-tale signs which suggested that I need to add more flour, or stronger flour, and perhaps less water each time I feed my starter.

I'd also read that you shouldn't change the flour used in the starter as that can lead to different bacteria cultures that can cause additional problems. But, weighing these two arguments up, I think it's worth a shot trying a stronger flour, just to see if it will result in a stronger starter.

I also know that I should be measuring my parts by weight and not volume. Despite knowing this, for these small amounts, I've started using measuring spoons to measure out 30-45g or bread flour and 30-45ml of water. This needs to stop and I need to go back to weighing (I've ordered some digital scales to make this a lot easier going forward!) 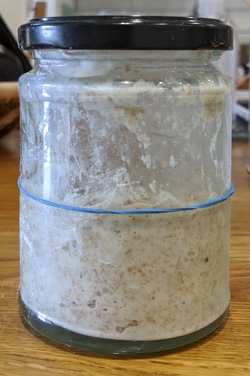 I decided to proceed as follows:

The blue elastic band shows the level the starter is at so that I can clearly see any height difference.

Already at this point, the starter is thicker and more like a dough, and not like the gooey, runny starter I've been using up until now.

I should note that it's a particularly warm day today in London. It rained earlier in the week and the temperature is about 22C with plenty of clouds. 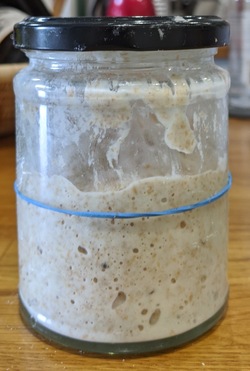 You can see some bubbles have started to form throughout the starter and it's already started to grow - the blue elastic band shows the starting point. Not much difference at this point but I'm pleased to see some change.

Wow. It's unbelievable to see such a drastic change in only two hours. My starter has never previously grown this quickly. Look at the height and the increase in bubbles. The starter is also darker in colour, taking on the wholemeal colour of the flour it was fed with.

Judging by this, the starter should be ready quite soon!

After three hours, the starter has filled the jar, is full of bubbles, and looks amazing! I think it's safe to say that my experiment has been a success!

I will now use this to bake my next loaf. 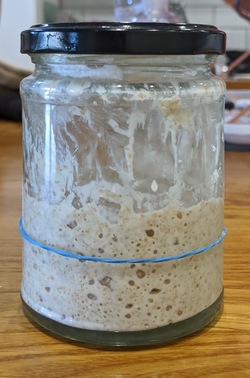 After using about half of the starter for my next loaf, I left the remainder of the starter in the jar without feeding it - just to see what would happen. I moved the elastic band down to the new 'starting' level.

The next morning, the starter has risen again; without any additional feeding. This is truly remarkable and a sign of how resilient the underlying starter was. The lesson learned: feed your starter stronger flour!